“Darwin made it possible to consider political affairs as a prime instrument of social evolution. Here was a pivotal moment in Western thought, a changing of the guard in which secular purpose replaced religious purpose, long before trashed by the Enlightenment. For the poor, the working classes, and middle classes in the American sense, this change in outlook, lauded by the most influential minds of the nineteenth century, was a catastrophe of titanic proportions, especially for government school children. Children could no longer simply be parents’ darlings. Many were (biologically) a racial menace. The rest had to be thought of as soldiers in genetic combat, the moral equivalent of war. For all but a relative handful of favored families, aspiration was off the board as a scientific proposition. For governments, children could no longer be considered individuals but were regarded as categories, rungs on a biological ladder. Evolutionary science pronounced the majority useless mouths waiting for nature to dispense with entirely. Nature (as expressed through her human agents) was to be understood not as cruel or oppressive but beautifully, functionally purposeful—a neo-pagan perspective to be reflected in the organization and administration of schools.”
—John Taylor Gatto, “Underground History of American Education” 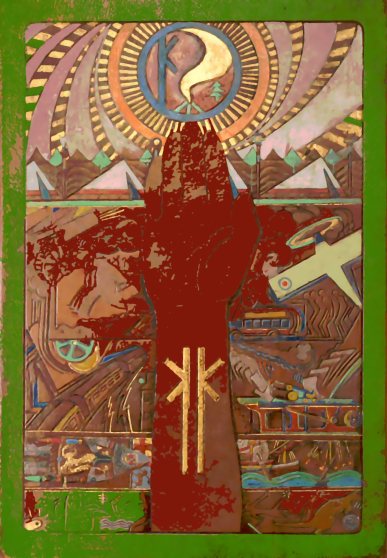 One of the things I’d been looking to find was some indication that any of my family (either my generation or my father’s) had been sent to any “dodgy” schools where they might have suffered some sort of sexual interference. I knew that my father (and his siblings) had been sent to various Quaker boarding schools from a very early age (Fairhaven Home School in Goathland, in the middle of the Yorkshire Moors, Keswick Grammar School, Bootham School, and The Mount School). I had found almost nothing online suggesting that any of these schools, or the Quakers, were connected to any sort of organized abuse.[1] And then there was Abbotsholme.

I went to Abbotsholme for two terms in 1978, when I was eleven. My brother and sister went there for several years. It is located in Derbyshire, thirty miles from Ripley, the town where my grandfather was born. There is, as mentioned earlier, a small town five miles from Ripley called Horsley, probably named after an aristocratic bloodline, since there is a ruined Castle there known as Horston Castle.[2] At least one Horsley (a soldier killed in World War I) is buried in Horsley cemetery, also suggesting a family lineage. This is a long way from proving that my grandfather belonged to or was named after such a lineage; but at the very least, it’s an unusual coincidence.

As far as I know, we weren’t sent to Abbotsholme on Alec’s recommendation, however, but that of our stepfather (Michael Vodden, who taught English in India after the Second World War and who allegedly knew Lord Mountbatten, widely rumored to have been connected to the Kincora Boy’s Home abuse scandal, in Belfast, Ireland, and the man who introduced Jimmy Savile to the Royal family[3]). This can hardly be called a coincidence, but nor does it imply any sort of secret agenda; my family considered itself “progressive,” and there were only a few schools in the UK that fit that bill. In fact, Abbotsholme, founded by Cecil Reddie, was considered the original modern progressive school. No surprise then to learn that Reddie was influenced by the ideas of the Fellowship of the New Life, in other words, a Fabian. I visited the school around 2010 with my sister and niece (who was thinking about going there), and I was surprised to see that the school symbol was a pentagram.

A thesis essay called “The Vegetarian Movement in England, 1847-1981” (presented at the London School of Economics, again), describes how, in the early 20th century, Quaker schools were introduced into this progressive schooling stream. The long tradition of Quaker boarding schools, the separateness of Quaker society, and their repudiation of the classical syllabus and the teaching of science, “marked these schools apart from the public schools. In the early twentieth century the differences became more pronounced with the spread among them of co-education.” Apparently this was the main reason Quaker schools were drawn to the world of progressive education, “though a more fundamental factor must be the shift that occurs in Quakerism generally that takes it into the orbit of liberal progressive thought.” [link] The essay also mentions how, “In 1893, A. C. Badley, an ex-master at Abbotsholme, founded the co-educational Bedales.” My sister went to Bedales before attending Abbotsholme.

And then there was this:

“The second important influence was theosophy, which was in the early years of this century much involved in progressive social causes and had not yet adopted the social introversionism that came later. In 1915 a number of progressively minded theosophists led by Mrs. Ensor and George Arundale founded the Theosophical Fraternity in Education, and in the same year the Garden City Theosophical School was founded . . . . A number of these schools and other movements of the period aimed at bringing children into direct contact with nature, with particular stress put on the idea of the woodland, as a means of developing confidence and skills. The feeling is best expressed in Ernest Westlake’s Order of Woodcraft Chivalry which was intended to be a more adventurous and libertarian version of the Boy Scouts, and with none of its militaristic tone. . . . In 1929 he founded the Forest School—a mixture of Freud and Red Indians, according to one master—and here the aim was to restore children to their ‘lost birthright of freedom.’ In all these movements the paradise theme was strong, and Ernest Westlake speaks of the ultimate purpose as ‘to regain paradise.’”

Fabianism, Quakers, Wicca, Theosophy, children’s education, “a return to nature,” sexual freedom, all tied together in the school which I and my siblings had ended up at. Who knew? I left after two terms by mutual agreement. I was unhappy being away from home, at least that’s how I remember it. I also got into a lot of trouble while there. I don’t remember anything especially strange about the teachers or the education methods, but I do have a set of slightly anomalous memories from my short time there. I remember being woken up in the middle of the night by two or more boys pouring water into my ear. The explanation they gave was that it was a method for inducing trance, one they had heard or read about somewhere. I also remember how there was a practice going around of hyperventilating and then having another boy pick you up by the torso and squeeze you. It was meant to be a means to enter into an altered state of consciousness. (As far as I know, neither of these peculiar techniques worked on me.) Lastly, and most curiously of all, I have a seemingly inexplicable memory of running around in a field with all the boys from my dorm room, in the middle of the night, holding sheets over our heads. I have never been able to make sense out of this strange quasi-memory. One other thing, perhaps unrelated: a few years ago I was reading a small collection of letters I wrote home from that period; in one of them I describe seeing a UFO.

Directly connected to this Fabian-Quaker-Theosophical-Vegetarian-Progressive-Schooling-Plan was a radical alternative educational movement started in England during the 1930s, called Grith Fyrd. Grith Fyrd (“Peace Army” in Old English) was founded (surprise surprise) by members of the Order of Woodcraft Chivalry, and began with two permanent work camps, one at Godshill, in Hampshire, the other at Shining Cliff in Derbyshire, five miles from Ripley. Grith Fyrd “took in unemployed men and tried to use them as a basis for creating a land-based community.” The movement’s vision “represented a mixture of socialism, co-operativism, eugenics and anti-urbanism . . . was strongly internationalist, but had particularly close contacts with the German youth movement. The Order’s main practical aim was to create an outdoor movement that would allow boys, girls, men and women to work and learn together.”

“The Grith Fyrd campers—or Pioneers—were a mixture of young unemployed men, who were able to continue to draw benefit, and idealists who mostly came from middle-class backgrounds. The Pioneers built the camp buildings and furniture themselves, and produced their own food. Aldous Huxley wrote in the Sunday Chronicle that the Godshill camp was ‘almost a replica of an American backwoods settlement of a century ago.’ For Huxley, the primitive conditions were an admirable counterblow against the standardization of modern urban, industrial society.” [link]

Grith Fyrd was never a large movement (camps consisted of between thirty and fifty “inmates” apiece), and it had effectively died out as a living experiment by the late 1930s. A handful of veterans organized in the late 1940s to plan the Braziers Park community—which brings us full circle.

Before setting up the School of Integrative Social Research, Norman Glaister had been involved in the Grith Fyrd barter-for-work system. The School (which also functioned as a commune) aimed “to explore the dynamics of people living in groups, to develop better methods of interpersonal communication and to find new ways of combining knowledge to make it more meaningful.” [link]

After 1937 [the year Northern Dairies was founded], Grith Fyrd members went on to found the Q Camp movement (Q stood for ‘quest’), which ran outdoor camp communities for troubled young men, and in turn influenced later outdoor education approaches to young offenders. It also had an influence on adult education, mainly through the Braziers community, where Glynn Faithfull and others ran what was effectively an adult residential college (and brought up his daughter, Marianne). It had an influence on psychoanalytic approaches to the management of therapeutic communities. Finally, it was part of a wider network of people and institutions who have tried to develop sustainable communities and peaceful living between the wars, and therefore has a place in the history of British environmentalism. [link]

Just like many of the Fabian ideas about progressive education, free sexuality, and consciousness expansion, Grith Fyrd was very much an early expression of what would (thirty years later) become known as “the counterculture.” Its heyday was in the 1930s, before the idea of camping out became tainted by associations with fascism (and youth movements associated with Hitler Youth). During that period, its history was “littered with characters one might fairly describe as crackpots: sandal-wearing, fruit juice-drinking vegetarians with beards, curious medieval yearnings and unscientific theories on child rearing, sun worship and gymnosophy.”

And not just sun worship: In its first editorial, “Dion” Byngham’s Pinecone made it explicit that the pinecone represented “not only the pine cones strewn about Sandy Balls but also the head of a penis.”

[1] The closest I got was the Orkney SRA scandal, which did include a Quaker group, but which seems to have been pretty much unanimously dismissed as a case of “mass hysteria.” (http://www.dailyrecord.co.uk/news/real-life/orkney-child-sex-abuse-scandal-1099361). I also found a recent (2012) case of a Quaker sexually abusing a pupil in Hessle, where my granddad lived till his death in 1993. It appears to have been an isolated incident. https://theneedleblog.wordpress.com/operation-greenlight/south-west-england/somerset/sidcot-independent-quaker-school/

[2] In 1514 it was granted by Henry VIII to the Duke of Norfolk as a reward for services against the Scots. Later it came into the possession of the Stanhope family. (Wikipedia)

[3] Savile “was first introduced to the Royal Family, he reveals, by Lord Mountbatten. In 1966, Jimmy became the first civilian to be awarded a Royal Marines’ green beret. Mountbatten was commandant general at the time and realised that Savile could be a useful contact.” http://www.express.co.uk/expressyourself/43798/How-Jim-really-did-fix-it See also: http://www.dailymail.co.uk/home/event/article-2687779/Jimmy-Savile-book-reviewed-Craig-Brown-The-man-groomed-Britain.html