Back to the Kubrickon: Kek, Trump, God-Manufacturing via the Internet & the Implicate Order of the Id 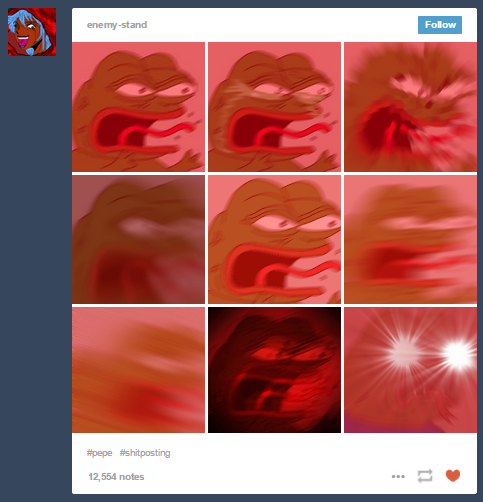 My attention was recently drawn to a website about the strange and synchronistic connections between Donald Trump’s ascension, an ancient Egyptian frog-deity called Kek, and the id-iosyncratic internet activities of 4chan. Read it yourself before resuming this exegesis.

What follow are initial thoughts which I posted at the Kubrickon thread over at RI, as well as at Faceborg. I consider this short piece one of the most intriguing propositions to have bubbled forth from the collective id, and the response has been disappointing, to say the least: one line comments from a molecular biologist, at RI, and an enlightened spiritual teacher, over at Faceborg. From humble beginnings….? But here it is:

My current view is that all metaphysical forces and entities can be understood as sourced in (extensions of) human beings. This is a premise, not a conclusion: if it were true, can we show how it could be so? At least this way, we can start with what is experientially knowable to us, as human beings.

(Both the molecular biologist and the enlightened spiritual teacher pointed out that some clarification is required regarding what I mean by a human being. They are right, of course, but this is a tough order to fill, being as I am a human being communicating, so far as I know, with other human beings about what it is to be human. As I replied to Dave Oshana, the question can become a circular one, since it’s also fair to say all human beings can be understood as an extension of metaphysical forces or entities, such as Dave’s posited ancestral meta-organism. At what point does a human being begin and an evolutionary/ancestral awareness end? Perhaps this is what is being explored here finally. But moving on for now.)

I have had my own encounters with beings or forces which at the time I felt were nonhuman, angelic, demonic, infernal or divine, and I am satisfied that such things exist in some form. But what they are and how they came to be is purely speculative, and if we are going to speculate, we may as well stay as close as possible to what we know.

One thing we know is that human beings have a tendency to try and control things, including or especially one another, and that the desire for power is a primary motivating factor in human behavior and the resulting social arrangements.

Based on this, I’m going to make several propositions to lay the ground for my attempted explanation of “what Kek is.” Firstly, let’s posit groups, in both the past and the present, who understand things about perception, awareness, energy, and human behavior that’s significantly beyond our current scientific, psychological, or religious understanding.

Secondly, let’s posit a desire (for whatever reason) on the part of these groups to establish forms of control and dominance over other people, using this knowledge to do so.

Lastly, let’s suppose that one of the ways they would do this would be to engender forms of worship in the people they want to control.

This relates to some previous points I made here about taboo and social control; see also Rene Girard’s Violence and the Sacred, and Freud’s Totem and Taboo (although I still haven’t read that one). I’ll leave someone else to fill in the blanks here as to how establishing forms of worship (religious values) in a people makes them easier to control. If you create a currency (like the US reserve printing dollar bills), you have control of that currency  and that means you also have control over the people who depend on your currency to live. A modern example would be artistic culture and celebrity worship, as evidenced at RI and everywhere else, by which even the most secular-minded people have unexamined admiration for–subjugation to–cultural figures, figures like Russell Brand, Leonard Cohen, Stanley Kubrick, or Lena Dunham.

Put in the most simple terms: is it possible to create gods which people will worship and to thereby become as gods to those people? The short answer is yes. The trick with understanding how gods are created is that it’s a circular process, a positive feedback loop. Gods can only be created through worship, so how do you get people to worship something that doesn’t exist? You have to first create symbols–names, descriptions, images–that represent the imaginary god, and persuade people to direct their worshipful attention towards those symbols: their fear,  desire, shock, awe, and wonder. Over time, this directed energy of worshipful attention  will animate the symbols and create an “egregore,” which is the concentrated energy of the attention of large numbers of people.

As to how to ensure that the symbols drawing the energy of collective fear-desire then send that energy to the people who created the symbols, i.e., how exactly a strange attractor, energy receptacle, or “cypher” (a code that also siphons), can be designed to receive and then pass on energy to its creators, this is not so clear; but then, this may be the most ancient and secret technology there is, so it’s probably best not to rush in when trying to figure out how it works.

Our best tool is self-examination: since we were engineered by this technology, we can reverse engineer it by deconstructing ourselves.

But coming back to Kek. This would have been a long-term project (all of this is), going all the way back to a pre-Egyptian, “Atlantean” proto-culture of priest-kings, shaman elite, or whatever, being the ones who first fooled people into worshiping them as gods, and so became gods themselves, in some limited sense, who were sustained, empowered, and elevated (maybe literally) by the combined psychic energy of mass worship. (We are talking a kind of satisfaction that Mick Jagger can only dream of.)

The final (?) phase of this project (as I think Kubrick anticipated, or was privy to) is now unfolding via the internet, which potentially links together the whole of humanity as a collective unconscious-slash-consciousness, the attention of which can be directed towards any given person, event or symbol (Faceborg being the current primary attractor), in order to “animate” it, i.e., imbue it with the same soul-sentience that’s being harvested from human beings via this collective consciousness trap.

So, we may ask: how could the ancient Egyptians have possibly known the form which this collective brain-link technology would take? They wouldn’t, but then they wouldn’t need to. They wouldn’t have needed to because they were sowing the seeds, the images and the desires, by which this technology would be created. Just as Star Trek gave rise to cell phones, the geeks in Silicon Valley (and on 4chan) have been unconsciously manifesting the dream of their sorcerer ancestors– a dream that was incepted in them while they were still sleeping inside their mother’s wombs (having been incepted in their great grandmothers’ great grandmothers’ wombs) –and bringing into reality.

These unconscious- incepted symbols–god-seeds–are then activated via a waking exposure to images, words, symbols, or sounds, that correspond with that ancient egregore of intent. Like Laurence Harvey staring at the Queen of Diamonds and switching over to his assassin alter, a million geeks are tapping their keyboards in half-trance, decoding Kubrick movies, election data, or Pizza-code for pedophilia, and only half-wittingly unveiling the hidden design of social reality to expose the implicate order of the id. All this would be happening precisely to schedule. It would be a masterpiece of design; but all-too-human in the making.

The attempt to harness an energy that cannot be harnessed (because it’s infinite) is the sorcerer’s apprentice played out on the world stage and collective psyche (as within so without), where the best laid plans of mice and mages invariably lead to nothing besides cracked cosmic egg on the face. Yes, it’s all planned, and no, it will never come off in the end, because it always ends the same way (as those of us who were there in Atlantis well know): as ruins at the bottom of an endless ocean.

In the meantime, to be in the midst of it and be able to see the id becoming conscious of itself, and all the layers of ego-imposed distortion and control shake and shimmy and explode, well, that’s worth paying attention to; not to the shadows that flee but to the blinding light that has chased them away. The man behind the curtain was always going to turn out to be you and me, because we are the only master who made the grass greener on the other side, and who caused the earth to (almost) die out of unrestrained greed for that unreachable world beyond.

109 thoughts on “Back to the Kubrickon: Kek, Trump, God-Manufacturing via the Internet & the Implicate Order of the Id”