Before Jake does his “stuff,” Beck chides him: “Someday you’ll be like me,” he says, “old and mushy” and “not so special.” It’s a bizarre remark. Beck isn’t even thinly disguising his jealousy and antagonism but communicating it openly. Of course, it’s meant as an attempt at humor, which is how it’s taken. But is there actually any humor in it? If not, what?

The exercise Jake is told to do has to do with “infinite series convergent,” in other words, something only mathematicians and physicists have any clue about. This further reemphasizes Jake’s “alienness,” the fact that he is not like ordinary, “God-fearing” people. To hardline Christians, this sort of knowledge is at best mumbo-jumbo, at worst hubris: the devil’s work. As Nietzsche wrote, “the original sin is knowledge.”

While Jake works on his equations, Beck continues to interrupt him with “self-effacing” “jokes” about how he’s just as smart as Jake is. The underlying message seems to be “Who does this kid think he is?” There’s a brief, incongruous shot of a black cameraman filming Jake on the right side of the studio. I could say something about this anomaly, but I’d rather not wander any further into speculation city than I am already. Readers are invited to offer their own interpretations.

Beck interrupts Jake and makes him stop what he is doing so Beck can draw a clumsy rendition of R2D2 on the other board. He points at it and says, “I’d go with that one!” in a scornful tone. What he’s conveying with this remark is, “We don’t need smart kids, we’ve got machines for this stuff!” The less obvious implication is that Jake himself is a machine, a robot, and that his only value is his “brain,” his ability to perform mathematical calculations.

Beck sits down and comments to the parents, pointing at Jake: “Still more!” (I presume this is what he says, though it sounds to me like “still born.”) He makes a remark about how Jake “can’t sleep at night,” his brain must be so busy. Besides the obvious meaning (that Jake is obsessive), the idea of staying awake at night has associations with predators and supernatural creatures, vampires and werewolves. More profanely: it’s what criminals do. Added to the other hints about Jake being more/less than human, it could plant further seeds of distrust. Beck is then told by the parents that Jake learned to write braille at one! This is an almost unbelievable detail, and it suggests less a brilliant child than something supernatural or unholy. In fact, to many Christians, supernatural is synonymous with evil. More generally, I’d guess that most Americans, Christian or not, wouldn’t want a child of Jake’s “freakish” talents, any more than they’d want a retarded child, and maybe even less so, since they would feel so inadequate in comparison.

For no apparent reason besides a cheap laugh, Beck shouts harshly at Jake, “Keep writing kid!” There’s a small chuckle/smile from the parents, but Beck doesn’t sound like he’s joking.

There’s a shot of Jake working on the board. His equations include the word “sin,” written three different times. 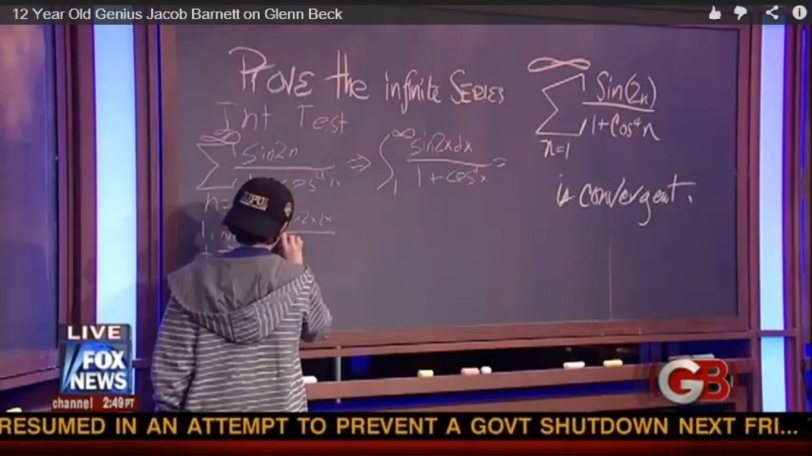 After Jake returns to his seat, we find out that he started college at eight. Beck then gives him several books:  The Five Thousand Year Leap, about the US Constitution and the Founding Fathers; a book about Benjamin Franklin (one of the Founding Fathers), one about Thomas Jefferson (another Founding Father and a US President), and a book called Physics for Future Presidents.

Beck’s choice of books for Jake gives a clear message: this kid is presidential material.  After everything that’s gone before, this idea isn’t likely to fill most of Beck’s viewers with joy. The picture of being 2nd-class citizens ruled over by a superior, robot-like, autist-prodigy and “evol” genius is more likely to fill their hearts with fear and loathing than wonderment. Finally, Beck produces one last book as a “gift” for Jake’s parents: William Stillman’s Autism and the God Connection. 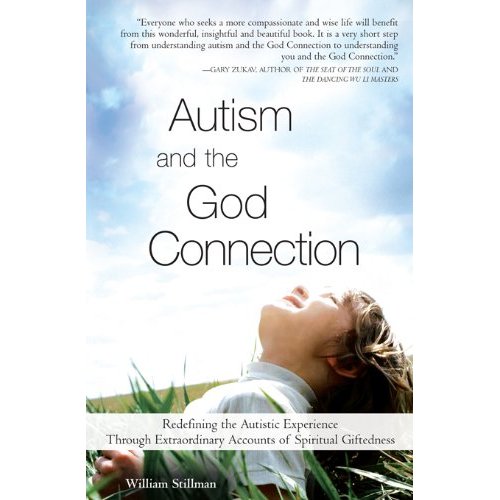 At the very start of the show, Beck has triggered his Christian audience with Nietzsche’s anti-Christian heresy, “God is dead.” He admonished his viewers to “NOTICE and RESPOND.” He overtly communicated that Jake the autist (like Jake in the Touch TV show) is “special,” a wonder kid and prodigy, and invited his audience to marvel over him.  Yet he goes on to frame him throughout the show as a freak and, more subtly, a threat.  Beck states several times throughout to “watch this kid”—a normal enough injunction for a TV show, but the forceful tone Beck uses sounds less like an invitation than a warning: Jake isn’t someone to watch but someone to watch out for. The reason to watch Jake, Beck says, is to see “God’s handiwork.” To demonstrate, he has Jake do something few, if any, of his audience will comprehend or have any interest in: an unfathomable mathematical equation, the only identifiable part of which is the word “sin,” written three times.

Beck then implies that Jake might someday be president. Finally he brings out Stillman’s book about God and autism. By now, it’s unlikely that many of his viewers will be inclined to see autism as in any way connected to God. The way Jake has been framed, he is either more than human or less than, either an inhuman brain/robot, or a miracle child, God’s handiwork in action. Beck’s attitude to Jake is one of suspicion, even hostility; he treats him like a kid who has got above his station and who is making Beck, and by extension his viewers, look bad, inferior. So the chances of most viewers seeing Jake as a god-child are slim, at best. That leaves the other option: to see him as something unnatural, inhuman.[1]

To conservative Christians there is only one “God connection” and it ain’t autism (or science!). It is faith in Christ. And since there is only one Christ, anyone who’s being framed as having (or being) that connection must be heretic and a pretender. A false messiah. (The Antichrist happens to be the name of a book by Frederic Nietzsche.) 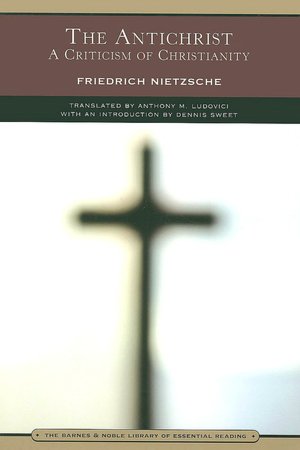 Beck’s last words to his audience are: “Watch him!”

[1] Not just homosexuality but autism is viewed by some Christians as demonic possession. Individuals within Defeat Autism Now and the National Autism Association “have attempted to exorcise autistic children, with mixed results.  Since exorcism is supposed to rid a person of demons, one wonders if perhaps the children reported as cured by the process were actually suffering from demonic possession and not autism. It is wise to note that children not cured by this process are usually killed by it.” (http://autism.wikia.com/wiki/Exorcism)See also: “Rick Santorum-Linked Universal Health Services Facility: Fraud, Assault And Alleged ‘Exorcism’” “Former Sen. Rick Santorum (R-Pa.) has become a top-tier candidate for the Republican presidential nomination in recent weeks by appealing to evangelical voters as a man steeped in family values and his Christian faith. From 2007 to 2011, however, Santorum served on the board of directors of Universal Health Services Inc., a large hospital chain which racked up dozens of allegations of abuse during that time — including everything from rape to suicide attempts allowed by neglect to murder. . . . The facility, located in Marion, Va., is a residential treatment center for troubled boys with mental-health issues. The majority of patients come from states’ child-welfare and juvenile-justice systems. The center promises stability, schooling, and clinically-approved therapies. It was also approved to accept Medicaid patients. It did not have approval to perform an ‘exorcism.’ But that is what appeared to be happening in an empty room at Marion in May 2007, according to a facility teacher who passed by the room, which was occupied by at least one nurse, a supervisor, a janitor and a boy with autism. Several in the room appeared to be hovering over the boy and praying, according to the teacher, who recounted the incident shortly after to Barbara Jones, the center’s director of education at the time. The severity of the boy’s autism left him hardly able to speak and unable to walk on his own, Jones says. “‘They were trying to exorcise him. That’s why he had the autism, he had a demon in him,'” Jones recounted what the teacher told her to The Huffington Post. “The cleaning lady was trying to cast out the demons.”

And: “An autistic 8-year-old boy died while wrapped in sheets during a prayer service held to exorcise the evil spirits that church members blamed for his condition.” (http://www.cbsnews.com/2100-201_162-570077.html)

Dr Jeff Bradstreet a DAN! Doctor and “an expert witness” in the Autism Omnibus case, is also “a keen advocate of Exorcism as a treatment for autism”; “not only does DAN! offer exorcism, it seems the National Autism Association heartily endorse it.” (http://leftbrainrightbrain.co.uk/2006/10/09/dan-on-a-mission-from-god/)

And so it goes.

15 thoughts on “Autism = Miracle = Supernatural = Unholy: How Some Christians “Think””