Or: Does Fox News Employ “NLP”-Style Methods to Manipulate Audiences?

What follows is an experiment in deciphering the ways in which mass media may be manipulating audience perceptions in order to illicit specific emotional responses. It was inspired by a comment by Lycaeus, in which he linked to this video of Glenn Beck’s Fox news show from 2011:

So that is some favorable publicity about autists… except that the interviewer has disdain for the kid and imo is rude and hostile to him, though he covers it up with a joking tone. The program might seem positive in regards to autism, though under the surface it’s ulterior motive may be to introduce the public to the new scapegoat: the autist. Viewers imitate the people they see on television (often reverentially, religiously), so the interviewer’s attitude towards the kid may be what the programmers intend to make the viewers imitate. The video is almost 2 year old so media programming may have changed. A lot of money, time, planning, strategy and effort go into these major network presentations, so every little detail is usually edited to deliver the correct punch, the intended programming, so nothing is an accident.

After I watched the video I noticed enough oddities to watch it again, this time it with an eye for every “little detail.” What follows is a summation, applying what rudimentary knowledge I have of neurolinguistic programming, or NLP. For those of you who don’t know about NLP, here’s an entertaining crash course, as Derren Brown leads actor Simon Pegg via coded signals to a foregone conclusion:

The following reading may (in fact inevitably will) be colored by my own perceptual bias, and I invite my readers to look at the first clip before reading it. Best of all, make notes and see how well your impression matches my own. My own position is that it makes little difference whether there is a conscious design behind such “NLP”-style methods, or if all of this is being done unconsciously. The effects are what interest me.

The 14-minute clip comes from the March 30, 2011 edition of Fox News’ “Glenn Beck” segment. Glenn Beck was later fired from the network. Beck’s website sports the banner “The Fusion of Entertainment and Enlightenment.” This is the first time I’ve seen Beck but a little stone-turning found some juicy bugs. Beck is a conservative christian and a Morman (Church of Jesus Christ of Latter-day Saints) with an apparent interest in conspiracy theory. He is also an icon of the Tea Party movement – notable for its wing-nuttiness,  including advocating the assassination of public officials. Beck and Sarah Palin were accused of inciting the mass shooting in Jan 2011 that left their political enemy, Gabrielle Giffords, brain damaged, as well as six dead and 14 wounded.[1]  This is most likely why Fox dropped Beck when they did, and that’s just some of the back-story on Beck.

At the start of the Fox news show in question, Beck is filmed in long shot with two blackboards on either side of him. On the board to his right, the words “God is dead” are written, with “Nietzsche 1882” before it, followed by a quote from the cover of a 1966 issue of Time: “Is God dead?” On Beck’s left is another  board with the phrase, “GOD LIVES, IS INVOLVED AND IS WAITING FOR YOU to NOTICE and RESPOND.” Above it is the year 2011, and the initials GBP. 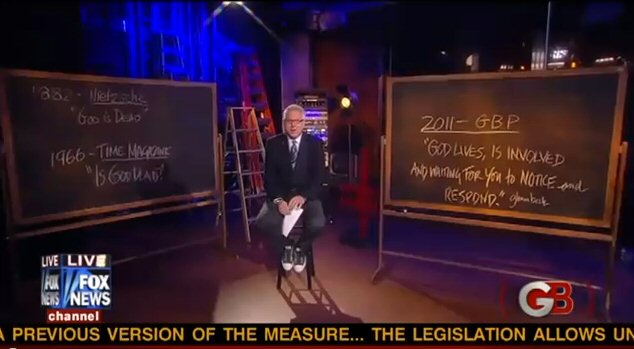 Beck gives a short political rant about how “the Middle East is crumbling” and makes a pro-Israel comment. The crumbling theme emerges shortly after, when Beck tells his audience, Forrest Gump like, that “Life is all about bread crumbs. You just have to follow them.” In the context of NLP, this could work as a coded command to the audience to notice all the hidden messages, follow the bread crumbs, and respond by reaching the required conclusion. (There is another reference to the Middle East on the blackboard behind Jacob’s parents: The phrase “Sweep the Middle East” is clearly seen, underneath which is the phrase “to destabilize,” and underneath that, “the rest of the world” (the last word is obscured by the head of Jacob’s father).

In the background, throughout this presentation (presumably a regular feature of Beck’s show) is a triptych of three of the founding fathers, Samuel Adams, George Washington, and Benjamin Franklin, drawn in the same style as Obama’s famous presidential campaign artwork (by Shepard Fairey). The three words Faith, Hope, Charity are written under the three faces. The artwork was apparently done especially for Beck (he sells T-shirts of it at his website), and it’s a curious detail since Beck has been openly hostile towards Obama. (He called him a “racist,” and sold an Obama effigy pickled in his own—Beck’s—urine on EBay). Why adopt Obama’s branding? I’d rather not say (suggestions welcome), but the presidential theme is one I’ll return to later on.

All of this political content aside, the Fox News clip is ostensibly about an autistic prodigy, 12-year-old Jacob Barnett, who is diagnosed with Asperger’s syndrome and referred to several times as “Jake.” What struck me right away was the connection to the popular Fox TV show “Touch,” announced shortly after the Fox news show, in Spring 2011. (“Touch” first aired in March 2012, a year after this clip.) In “Touch”, the autistic, non-verbal child-hero, 11-year-old Jake, has an uncanny grasp of numbers that allows him, not only to predict but redirect future events (with the help of his neurotypical father, played by Keifer Sutherland). “Touch” is about “the power of a person’s mind to change the world.” That’s not a tag-line for the show, however: that’s how Beck introduces Jake Barrett on his news show.

First of all we are shown a clip of Beck in his New York office with Jake. Jake is standing on the ledge of a large window that looks out onto the Chrysler and PanAm buildings, writing equations with a marker pen. A title  informs us that Jake’s IQ of a 170 “may be higher than Einstein’s.” Beck asks Jake a series of questions, Jake’s answers to which are clearly edited. The impression given, whether accurate or not, is of Jake’s slight smugness and superiority. When Beck mentions that Stephen Hawkins can think in three dimensions, Jake replies that he can think in four and five. Jake is positioned physically higher than Beck, so the camera looks up at him, increasing the impression of his superiority. Beck makes the first in a series of snide remarks when he tells Jake to draw a cat. A picture of a cat is inserted briefly, followed by Beck’s goading, “Can’t do it, can ya kid?” The implication is that Jake may be a great scientist but he’s no artist, and less overtly, that he is no good with “living things.”

Beck tells Jake that Jefferson was able to write backwards and asks Jake if he can do it. The phrase Jake writes backward is “I love New York.” Love is seen as “evol.”

Since Beck is a conservative Christian pundit, it’s safe to assume most of his viewers are the same types, and for conservative Christians New York is a den of iniquity, home of liberals and homosexuals. The most fundamental Christians are creationists, for whom the idea of evolution is wrong. (Hence perhaps why the show publicity emphasizes that Jake has a theory that will “disprove the Big Bang.”) The connection between evil and evolution is literally spelled out by Jake here, as well as his affinity for the evil liberal enclave, NY.

Beck asks Jake where he is going in life. Jake says he wants to write a text book on maths, become a professor, and study astrophysics.

We cut back to Beck in the studio. Beck has his middle finger resting on his mouth, as if subtly giving the finger to Jake (or the audience). He says “I hate that kid,” then quickly switches fingers so his forefinger is now against his mouth. The line gets a laugh. Why? Because the only way to take his remark is as a joke. The alternative would be that Beck is the kind of guy who incites people to hate crimes. Uhhh. Along with his behavior towards Jake throughout, Beck seems to be cuing audiences, under cover of his little “joke” (and with the hand gesture), how to feel about Jake.

And later, what to do about him.

[1] “In the past month or so alone an alarming number of cable and political personalities have been casually calling for various people‘s assassination.” (Olbermann Connects Giffords Shooting To Sarah Palin, Glenn Beck And Apologizes For His Own Remarks.) Media Matters founder David Brock appeared on Hardball and revealed to Chris Matthews: “Glenn Beck Has Been Responsible For 3 Thwarted Assassination Attempts“)