The Violence of Silence (or: Hulk Smash Puny Humans!) 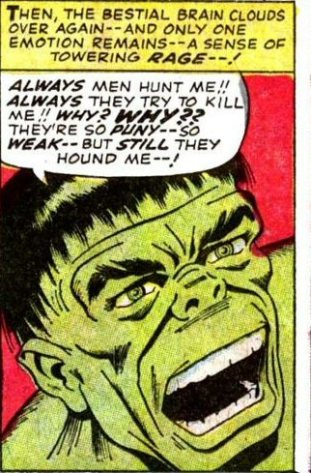 Why are you angry, Jasun?

“Because I made a picture and no one cares!”

Ah. Because people don’t value what you do? Why do you need them to value it?

Translation: Because your own sense of what has value depends on receiving validation from outside?

“Of course it does! Who wants to be Van Gogh or Kafka? A falling tree in an empty forest?!!”

It’s been a while since I have felt this angry without any visible object for my anger.

As Bruce Banner knows all too well, Anger is an energy.

It helps to remember that anger is almost always a result of taking oneself too seriously. (The exception being the sort of anger that caused Jesus to overturn the money tables in the temper: righteous wrath. But this isn’t that.) Most of the things we get angry about are things we laugh about when they happen to someone else, like losing a sock.

To that extent, it can be useful.

Probably the best outlet for anger is play—as in sport, or even sex—spontaneous activity that loosens up the ego. (It needs to be mostly non-competitive, otherwise the anger will escalate, as in football hooliganism.)

So I am trying to be playful with my rage.

In the movie Network, Howard Beal shouts, “I’m mad as hell and I’m not going to take it anymore!”

The truth is, I’m mad as hell and I am going to carry on taking it because there isn’t anything else to do but take it. Anger may be triggered externally, but it comes from the inside.

The spiritual path is largely about learning to take the “licks” the Universe gives us and like them. Thou shalt not kick against the pricks.

The whole notion of revolt is absurd and doomed to eternal frustration, endless cycles, because the source of all injustice is our own stupidity and stubbornness.

I confess I am at a loss: like a revolutionary who no longer believes in the cause.

I put together the Beyond Dirt movie and campaign (with the invaluable help of others) and now it stands like a dusty tombstone with a few wilting flowers upon it.

Apparently I have followers, subscribers, fans, even into the hundreds; but almost none of them are interested enough to support the project with anything besides words.

The result is that I feel more anger and disgust for my “fans” than appreciation, and that I am less enthusiastic about the project than I was before I launched the campaign. My offended ego says, if people care so little about it, why should I?

The idea of an artist creating for him or herself smacks of solipsism, compulsive, introspected behavior; like an infant smearing shit on the wall.

Do I value what I do, and if so, why do I need validation? If anything, I value what I do too highly, which is why I get frustrated when others seem to value it so little. The real question is, do I enjoy doing it enough to continue to do it, regardless of any visible results in “the world”?

And although the answer feels like a NO, it continues to look like a YES. Because I keep on doing it. I continue to take the “abuse” of indifference, what my late brother once called “the violence of silence.” Maybe I am addicted to it.

Apparently I am looking for allies, brothers and sisters in arms, and experiencing the frustration of not finding them, of realizing that I am surrounded by talkers who will not or cannot walk. But allies for what?

I am not a general, I am only a grunt. A grunt doesn’t wait to see if the other soldiers are marching. If he did, no one would move. He follows orders and marches.

I don’t have any audible orders to follow so all that leaves is to find and follow my passion. That’s what Jesus did when he marched to Calgary. Forsaken by his followers, and even the Father in the end. Did he feel angry and bitter? He wouldn’t have been human if he hadn’t.

But we are not only human, and that’s where my passion leads me: beyond the dirt of “only human.”

8 thoughts on “The Violence of Silence (or: Hulk Smash Puny Humans!)”