A Word About Big Blood 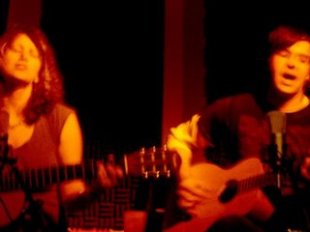 While putting together the 10 minute “teaser” film for Beyond Dirt, I was at a loss for the right music, and I asked my partner to look for creative commons music online. She did a search for ‘country’ that led her to Dark Country Magic, by a band called Big Blood. I had never heard of them and my first, rather callow assumption was that if they were giving their music away online then they were probably amateurs! (I’m embarrassed to admit this, but old patterns of thought will persist.) . I started to listen to the songs however and realized at once that not only was it rich, complex, extremely original music, it was also perfect for the movie.

The next day I found another site where I was able to download all their albums and since then I have listened to almost all of their hundred plus songs. That first impression proved solid – they are a unique musical blend of folk with alternative with experimental music, part J Harvey, part Tom Waits, part The Kills, but mostly their very own indefinably wonderful thing.

I incorporated three of their songs – Breath of a Seed, Ringers in the Fold, and Mouth of Seven Tongues, into the film and in my opinion it transformed the footage and helped me to see its potential. The music helped to blend the raw, “country” elements of gold-prospecting and wilderness survival with the otherworldly, “extraterrestrial” or “sci-fi fantasy” themes of spiritual questing and enlightenment. It added mystery to the film while at the same time grounding it and giving it more substance or “body.”

I contacted Big Blood to make sure they were OK with our using the music. I received a response a few days later from Caleb Mulkerin, one quarter of “the phantom four piece” of Big Blood (the other three being Asian Mae, Rose Philistine, and (I believe Caleb’s partner) Colleen Kinsella). Caleb told me that he loved the film and that I was welcome to use any music of theirs I liked. He said he was grateful I’d asked, however, because a lot of people were using Big Blood’s music lately for things which the band weren’t necessarily that impressed by; although  the music was CC attributed (they believed art should be available to everyone), it bothered him a bit that people didn’t take the time, or extend the courtesy, to contact them about it.

It’s tempting to look for a metaphor about how I found the “gold” of Big Blood’s music among the “dirt” of free online music directories, but that might seem a bit rude to other musicians, and I don’t want to belabor the point or try and make this into a deep meaningful post when it’s meant to be informative, and appreciative, regarding the source music of the last two films I’ve done. Since I heard from Caleb, I looked a bit more into Big Blood’s history and saw that Caleb used to be part of the band Cerberus Shoal, a well-respected alternate rock band, whose label was Young God Records – the label founded by the Swans, a band I was obsessed with over twenty years ago! Another strange coincidence is that Big Blood are based in Portland, Maine, a town I had only even heard of because I attempted to visit it a few weeks ago, when [enlightenment teacher] Dave O gave a retreat there. (I say attempted, because it didn’t work out due to some difficulties I had, which I won’t go into here.) So there appears to be the hand of destiny in all of this.

I encourage people to check out their stuff, you can find it at YouTube or the site linked above, here’s a taste to get you started, BB’s awesome rendition of Blondie’s Heart of Glass:

One thought on “A Word About Big Blood”